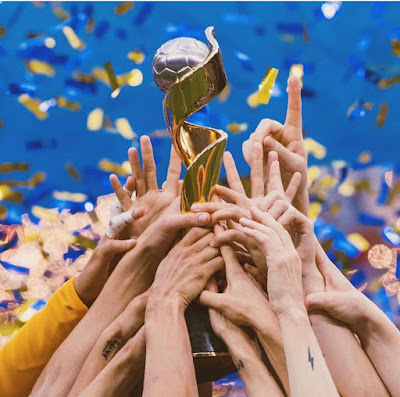 It's been close to two weeks since the USWNT won against the Netherlands, bringing home their 4th World Cup victory. I am completely biased about the USWNT and this team in particular (see here, here, and here) and loved having the opportunity to see them play. There are some strong personalities on the team, which might not be your cup of tea, but I appreciate that they are using this moment (and it will be just a moment) to push forward on equality in their sport.

What I find bothersome is some of the talk that the team is being unpatriotic, ungrateful, even un-American because they are calling out what they see as unfair at the same time they are collecting accolades and awards. I admit that I have had similar thoughts, that it's disingenuous for an individual that is well paid and enjoying fame to complain. They have it made right?

Listening to a completely unrelated pod cast (It's Been a Minute) on Millennials and Money put something into words that fits this case too. One of the millennials interviewed said she covers up the fact that her parents are funding her attendance at graduate school because she doesn't want to seem privileged. As the podcast went on, they came around to the thought that hiding privilege isn't necessarily the answer, but rather acknowledging privilege and using it to do further good in the world would be better in the long run. Isn't that our obligation as Americans also? To use our enormous privilege to make our country and the world a better place?

Full of bravado and celebrating every moment - hell yes, says the USWNT. But ungrateful and unpatriotic?  I may or may not agree with their form of protest or the issues they advocate for, but I am SO PROUD of them for speaking up.

Posted by elisabeth at 4:50 PM