Celebrating Goals and the USWNT 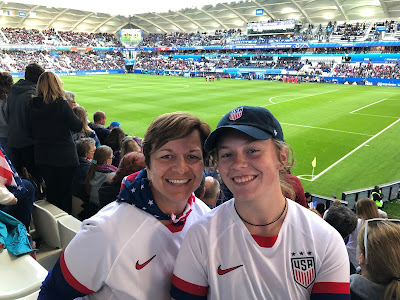 My daughter and I are here in France to see women's World Cup soccer, and were at the epic 13-0, record breaking US victory against Thailand. It was incredible to be there.

My mom was watching from home and texted about some of the commentators saying that the US team was celebrating too much and "running up the score." The social media backlash/support started before the game ended and was pretty epic. Of course "we" can't be happy, even in victory. I have thoughts on this (of course).

At the game, my daughter and I cheered wildly for every US goal but completely commiserated with the Thai team. Vicariously through my daughter I have been on both sides of a game like this. She's played on teams that were state champs. She's also played a rugby game that ended 0-154. That's not a typo - one hundred and fifty four points scored against them. When the team that is killing you scores yet again and celebrates, it can feel like they are really rubbing your nose in it. I get that, but...

Setting aside the vagaries of FIFA-level soccer (goal differential as tie breaker, limit of 3 subs, distribution of bids among regions), I don't think the US teams' celebration and epic number of goals was ever meant to be hurtful. I think it was more about relief.

Yes, relief. Can you imagine the pressure the US team is under? Returning champions. Leaders in their field, a very male dominated field. Fighting publicly and with great risk to their standing with US Soccer and FIFA for equal pay. A fight that is being watched very carefully by women's teams around the world (see this great commentary by Sally Jenkins of WaPo). The team is a mix of veteran players but also rookies stepping on to the first World Cup field - how did they keep the nerves at bay?

I can easily equate this to the women who were the firsts in the military - first to attend academies, fly fighters, graduate from Ranger school - under a microscope while also wanting to just be treated like everyone else. I can imagine that the fist pumps and smiles as they got their commissions, got their wings, got their tab, were exactly like the USWNT.  Phew!

We have one more chance to see the US team before we head home, back to the real world. I can't think of a better way to spend our last night in Paris.

Note: If you need a tutorial to better understand soccer, please watch this, you will not regret it.

Extra special note: Buckets full of love and appreciation to my awesome husband who unconditionally supports our travel adventures. He is the best!
Posted by elisabeth at 3:12 AM