Being Authentic, the Lesson I Would Give My 20-something Self 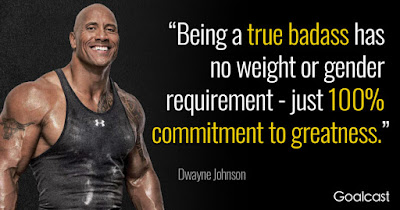 A couple summers ago we decided to watch the entire series of Fast and Furious movies. We're in to high culture like that. Which is how I became a fan of The Rock. Start following him on Insta and you'll fall for him too. Maybe it's all show, but he seems like a genuinely nice guy, and 100% totally himself.

A recent speech he made at the MTV Movie and TV Awards put in to words something I believed but didn't always have confidence in:

"The most powerful thing we can be is ourselves... And yes it's important to be yourself but you gotta recognize the joy and the responsibility of bringing everybody with you. We bring everybody with us, and you do that by being kind, by being compassionate, by being inclusive, and straight-up just being good people because that matters."

I wish I could have said, "Sometimes people won't get you, and that's okay." I wish I could have ignored the startled looks I often got from my Air Force supervisors and leadership when I was being goofy and cracking jokes, and asking, "So why do we do this?" when it didn't make sense to me, or asking if we could have some fun like wear costumes for a Halloween party at a deployed location (the resulting party was epic, awesome, and fueled only by non-alcoholic beer).

I got there, eventually. But for everyone else on a journey you are passionate about, but don't 100% fit the usual expectations, rock on. Be you. The right people will figure out you're awesome, eventually.

You can read the text of the short speech here, or watch it below.

Posted by elisabeth at 2:02 PM