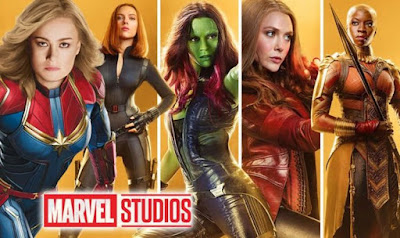 Marvel movies are big at my house. It's more than just living with a super fan (my son). The Marvel movies came along at just the right time, when my kids were outgrowing typical kid movies but weren't ready for adult fare. We could all enjoy them, which is not really a chore. Marvel heroes are easy to like, and the continual addition of women and minorities in the MCU was very much appreciated.

What do these super heroes have to do with the Air Force? Besides the Captain Marvel backstory, more than you might think. After seeing Captain Marvel (twice) my son and I were out walking the dogs and chatting about what we liked, where it fit into the time line, what clues there were for the next movie, etc. Then he said, "You know airplanes and stuff, how close is the Quinjet to reality, is it possible?"

I wasn't sure how to answer at first - I am neither a pilot nor an engineer - but I do have many years around Air Force airfields. We talked about the CV-22 Osprey, the AV-8 Harrier, the challenges of helicopters vs airplanes, and some of the hard lessons learned when the Air Force and Marine Corps developed these aircraft.

All of that aviation that got baked into me while in the Air Force came to the surface again, and resulted in such a great conversation with my 16 year old. He didn't grow up with a "usual" mom (not that he ever said anything about it) and it makes me happy my Air Force time gets me a little "cred" with him.
Posted by elisabeth at 2:47 PM