Guest Post: A Few Ways to Not Be a Jerk While Flying 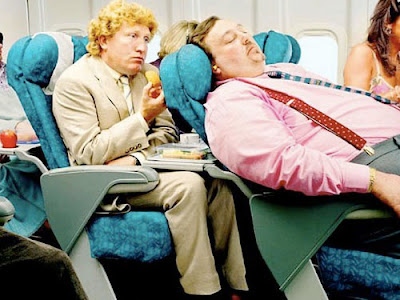 Inspired by our recent coast to coast flight for Thanksgiving, my son decided to start writing a book on how to be a better passenger. It's pretty amusing, especially coming from a kid who has more airline miles than most adults. I think he crossed the Atlantic 4 or 5 times before he turned 2! What follows is his introduction, and I hope that having a place to share his writing will inspire him to continue to do it. Enjoy! (Authors note: hope you don't mind comic sans)

Being the son of a commercial airline pilot and a mother who won’t tolerate any form of BS (Editor's note: ahem :-)), I have been on a lot of flights and been taught a ton of manners and just general politeness the hard way, and with these two lenses you tend to see the world and the way people act in a whole new and annoying light, especially when it comes to air travel. First off, I don’t want you to think I’m better than everyone like a comedian. I’m just your average 15-year-old who likes to observe and has an opinion on like, everything. There is just something about being in a crowded line, cabin, or, terminal that just turns people into these animals. The whole point of this endeavor to be a polite person while going from point A to point B is just be the most forgettable person you can be.

Now I know that might sound condescending but if you’re not very forgettable then 99% of the time your fellow passengers will have a new story to tell at the dinner table about how annoying that weird guy sitting in that seat behind them. “But what about the other 1%?” I hear you thinking, that other one percent is when you are so well behaved and polite and kind that you are remembered for your actions of kindness. However, I have never encountered such a person, and thus the chances are so low that you might as well get struck by lightning while winning the lottery because that has a greater chance of happening.

Now that the boring intro crap is out of the way let’s get to the good stuff. I put each “rule” into different chapters about different points during your flight experience from leaving the house to pulling away from the airport. Also, each rule has a color-coded level to show the importance of each rule. For example, green is just a suggestion, yellow is a strong recommendation and red is if you don’t follow you run the big risk of being THAT guy. Now that this simple system is set up and explained let’s explore the disgustingness of human behavior as we dive head first into the abyss of the commercial airline business.
Posted by elisabeth at 6:15 PM