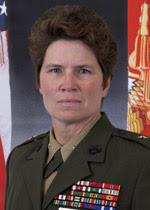 I just attended the Officer Women Leadership Symposium hosted annually by Academy Women.  Academy Women is an organization dedicated to leadership and mentorship that is open to women of all commissioning sources. It's a really great event that brings together women from all services and all ranks.  By far the best panel I went to was on Authentic Leadership.  On the panel was Brig Gen Lori Reynolds.  She looked like a tough customer!  But she couldn't have been a warmer or more engaging speaker.  She instantly telegraphed both competence and warmth.

When we got to the audience questions, a Navy midshipman stood up and asked the General about how to carry herself.  She described herself as "6'1" with a face that always makes me look angry."  She asked how she could change to be a better leader, because she didn't feel like she was received well as a midshipman leader - that she intimidated.  General Reynolds said simply, "Don't change." She encouraged the midshipman to be herself, and let her actions speak for her.  She also recommended standing up slowly, and that the midshipman's ability to see eye to eye with her sailors would be an asset.  It was such a refreshing take on the issue.

Another audience member asked about what to do when you are not recognized as the leader in a group, especially in civilian attire.  Diane Randon had a super great answer for that.  She's 5'4" and is the civilian equivalent to a 3-star, but often gets mistaken for the assistant to her 2-star deputy.  Her advice was that really, there was nothing you could do, that being mistaken for something less had happened her entire civilian career.  But having someone underestimate you, if only for a moment, is really a benefit - that there is power in the element of surprise.

The biggest take away from the panel was to be your self, your best possible self, that authenticity is what would make you the best possible leader.  It's something I bet most all women in the military struggle with, because your style of leadership is likely going to be different from your male counterparts.  But hearing the panel speak was a great indication that just because your approach might be different, doesn't mean you won't be successful.  Awesome!
Posted by elisabeth at 9:16 AM