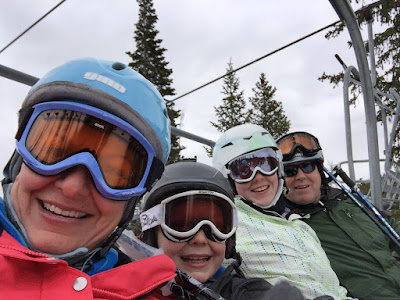 Last week was our spring break, so we used the time to head out west to do some skiing.  I LOVE TO SKI.  It's the one sport I am a natural at, and I love that everyone else in my family loves it too.  Conditions were pretty decent for spring skiing and the slopes were uncrowded, and we got a couple inches on the mountain to freshen things up, just for us :-)  After a week of dry roads, we were surprised that things got a little dicy as we headed back to Denver, over the Wolf Creek Pass: 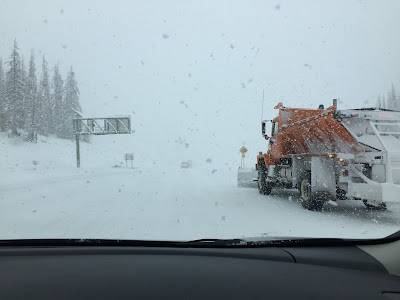 We were in a mini van which isn't the best vehicle for snow, but we took it slow and steady and made it up over the steepest part of our drive.  We had one last up and over to do, to get to the main highway north to Denver, when conditions got even worse.  We were both looking out to make sure that we stayed on the road: 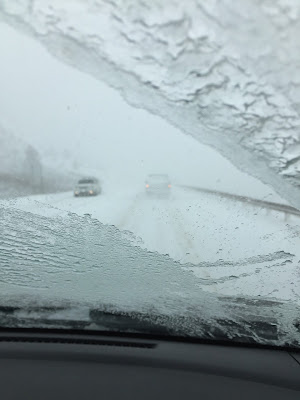 We were sooooo close to the highway, finally, when things fell apart.  Inexplicably, a car was stopped in the middle of the road, doors open, with the driver walking around.  Another car had pulled along side it on the right to avoid colliding.  There was oncoming traffic, so we had no choice but to try and pull to the right of the second car, which resulted in this: 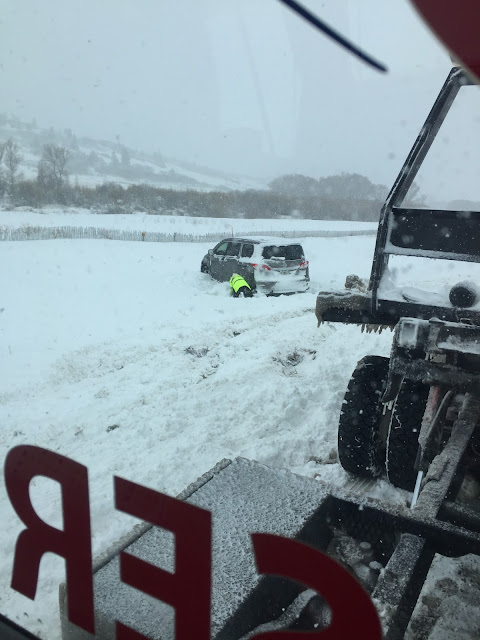 Luckily we were going less than 20 MPH, so the airbags didn't deploy and no one got hurt.  Two weird things happened right away: The car that started the whole mess, the driver who chose the middle of the road to stop, disappeared.  Only us and the second stopped car (who we had slid into on our way into the ditch - sorry!) remained.  The second weird thing?  When I called USAA and told them it was a rental, they transferred me to claims from roadside assistance and told me to call the rental company for towing. Wha??

But then everything went right.  USAA stayed on the line while I talked to Hertz.  The poor woman we hit with our van was incredibly nice and very calm.  We had a car full of ski gear, so while it took a couple hours to get pulled out of the ditch, we had jackets and boots and other things to keep warm. The Colorado State Trooper was awesome, and while technically we were at fault, he didn't cite us because both of us had the same story about the mystery car that started the chain reaction.  Hertz sent a crew that put our van on a truck and our new friend Lenny drove us and the damaged van all the way to the Colorado Springs airport, where the awesome Hertz agent Barbara handed us keys to a replacement van.  She didn't even scold us for delivering an un-driveable van to her.  My Aunt and Uncle, who we were headed to see in Denver, were willing to drive nearly anywhere to pick us up, and were incredibly gracious when we arrived 5 hours late.  My Uncle makes the best breakfasts ever, which was the best medicine ever the next morning.

My husband and kids were awesome (-er than their normal level of awesome).  My husband dealt with the real humans and I was on the phone coordinating and filling out forms.  My kids stayed pretty calm and were amazingly self entertaining. In the big scheme of things this bump in the road (ha ha!) wasn't that bad, but it was nice to see my family handle it well.

There is still much paper work to do and deductibles to pay, but we are home safe and sound and have a good story to tell about that time in the ditch...
Posted by elisabeth at 12:41 PM