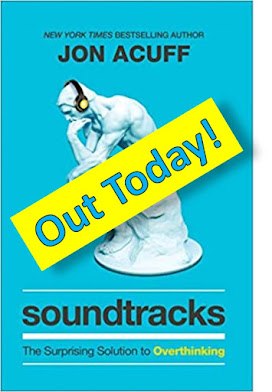 I am a big fan of Jon Acuff. He has a great social media game and is always positive and fun. But also what he has to say is usually what I am longing to hear. So when I got the chance to read a preview copy of his new book, Soundtracks, I had to take it.
I am a complete overthinker. My friends and coworkers often say "you are so calm," but that's not true at all. I just don't say out loud the frenzy of thoughts in my head. I have probably already conjured up and overthought all the possible pitfalls of whatever it is that is going on, and have come up with plans to fix problems that haven't even happened yet. Or I am distracted because I am reviewing all the things that have already happened that didn't go well. Sometimes this is helpful - running through possible risks and outcomes is a handy tool for raising kids and managing people - but over doing it can be exhausting.
Jon gets this. He defines overthinking as "when what you think gets in the way of what you want."  It's a soundtrack that plays over and over, stealing your time, creativity and presence. Every time a soundtrack plays in your mind, Jon says you need to ask three questions: Is it true? Is it helpful? Is it kind?
How many times have you accepted a judgement about yourself without actually asking these questions out loud. I had a boss once that was incredibly hard to read. I was convinced that he thought I was terrible at my job. Then one day he complimented me (to another person) in his usual gruff way (something along the lines of the squadron did well while the commander was deployed - very effusive). Woah. How much time had I spent worried that he thought I was a terrible leader?
More than just these three questions, Jon's book has tools and tips to change your soundtrack. Not eliminate it, but flip it, and turn it into a super power. He is a great writer and the book is a fun read. It's full of great stories of his own, many others, and even the science behind how and why we overthink. Despite my best intentions, I rarely finish any self-help books, but this one I sure did. It was that engaging. I took many notes as I read it, and plan to listen to it now that the audio book is out. I know you will enjoy it too!
You can order the book today (on Amazon or your favorite bookseller), and if you do before April 9th, you'll get the audio book for free! Go to this website to claim the bonus audio book after your make your purchase.
Posted by elisabeth at 11:39 AM