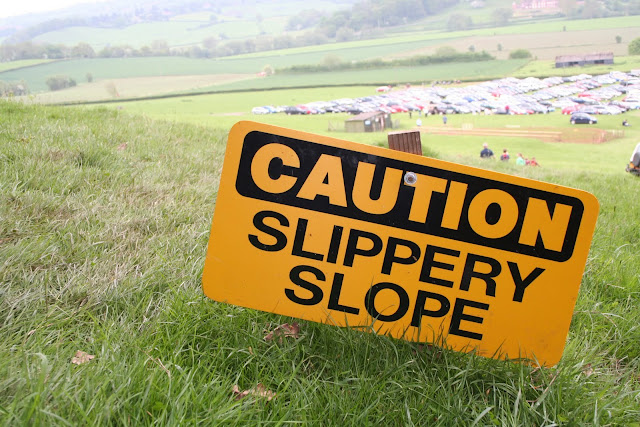 (source - a great academic blog on
judgement and decision making)

I listen to a lot of podcasts, and live near Washington, DC, and the term I am hearing more and more is SLIPPERY SLOPE.  For example, this exchange on a recent It's Been a Minute podcast (host Sam Sanders was interviewing architecture critic Kate Wagner):

WAGNER: ... And this became, like, a big enough phenomenon that the New Statesman published an article about these accounts and how they're, like, weirdly, like, crypto-fascists.

SANDERS: Crypto-fascist - what do you mean by that?

WAGNER: Talking about things like the downfall of Western society and how, like, modern architecture's degenerate, which was a dog whistle used by, for example, the Nazis in order to go after institutions like the Bauhaus and sort of, like, a cultural purge. And there's a lot of sort of cloaked rhetoric about the supremacy of, like, Western aesthetics.

WAGNER: Yeah. It's a slippery slope.

Note - this was a discussion about the architecture of government buildings. Ugh.

Slippery Slope is code for "lean slightly that way and you will fall directly into a very bad dark place." Avoid those slopes at all costs!

It's a judge-y way to tell you that you dare not compromise, you dare not even listen to anyone not saying or agreeing with exactly with the speaker.

It's SLIPPERY because it's hard, yes. But it shouldn't be a barrier. There are lots of tough issues out there, and categorizing any kind of compromise as a slippery slope is just lazy.

As soon as any one or any organization says even thinking about a compromise is a slippery slope, I'm out.

Posted by elisabeth at 3:32 PM