Sir or Ma'am: The Crux of the Issue 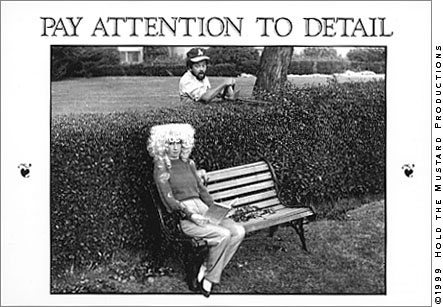 There is a spirited discussion (among many - it's such a great group!) over on USAF Women Officers Forum about using "Sir" or "wives" in a group/unit e-mail, and many other instances sited in the discussion. Such as being asked for your sponsor's social, even when you are standing there in uniform.  It's a small thing, but one that gets under people's skin.  Many commenters noted it was a good opening to discuss inclusion, and a couple said, nicely, get over it.  It's a small thing.

Getting details like that wrong bugs me to no end.  And not because I find it offensive, in fact, I was kind of hoping that they wouldn't change the spouse retirement certificate to something gender neutral before I retired.  I thought it would be hilarious for Greg to be commended for being a supportive wife.

So why does it bug me so?  I thought more about it as I read through the comments and realized that it's because I hate when people don't pay attention to details.  Details matter, and I learned that the hard (albeit harmless) way.

I was a brand new lieutenant, running late to a meeting with some big wigs, nervous because when you are a lieutenant everyone outranks you.  It was raining and as I cut across the street to dash into the building I spotted someone covered in a camo poncho, head to toe, right as they shouted, "Hey LT, aren't you supposed to be saluting a senior officer?" "Yes, sir, sorry sir!" I babbled.  "Don't you mean ma'am?"  "Yes, ma'am, sorry!"

Then there was that time I wore my only medal on the wrong side of my mess dress...The nicest, classiest female senior NCO said hello, and then leaned in, whispered into my ear and pointed to the ladies room, saving me from further embarrassment.

Details make a difference.  It means you made the effort to do it right.  Unlike my lieutenant self :-)
Posted by elisabeth at 7:24 PM