Timeless Awesomeness from My Pop Even if you haven't moved around in a while, things get lost in your house. Since I have a lot of time on my hands (yet have done little writing in 2 weeks, ahem) I decided to clean out a few closets. While stuffing something in a box under my bed, I spotted another bin with picture frames in it. Hmmm. I had no idea that was there. Inside were some classics (no one need see that Glamor Shot from 2000, ever), a certificate from Women's History Month 2008 in Iraq, and a letter from my Pop that I had framed.

The letter was titled, "Pop's (Old Commander) suggestions for Daughter (New Second Lieutenant)." He sent it to me right after I arrived at my first "real" duty station, Yokota Air Base, Japan, in 1992. I had run into my first of many unexpected challenges, like my Captain boss admonishing me for not having my Master's Degree started. His attitude was generally sour because he was about to be separated involuntarily by the Air Force. Not so awesome a start to what supervision should be like.

My Pop's advice is remarkably applicable today, even if some of the vernacular is dated:

1. Remember, your most important relationship is with your boss.
2. Always make the boss look good.
3. Always tell the boss the truth, even if he doesn't want to hear it.
4. Find out what the boss hates to do then do it. It will probably have something to do with paperwork.
5. Get to know the senior enlisted person. Seek his advice. He'll probably be tougher on the troops than you but he'll probably be right. If you are lucky, he/she will take you under their wing cause they want to see you grow into a first rate officer.
6. Take care of the little stuff (like remembering the secretary's birthday).
7. Keep your office door open for anyone but watch out for sob stories that have no merit. The junior folks will be the first to test you.
8. Remember, you get promoted based on job performance. Not having a Mater's degree or some other thing is only an excuse by others for not getting promoted.
9. Always give orders as if they were coming from you. Do not invoke the boss' name to get something done.
10. Always be a good person and say your prayers. God really will take care of you.

My Pop died just three years later. I am so happy I found this! 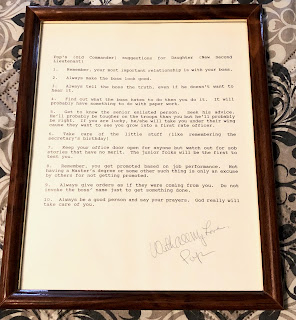 Posted by elisabeth at 2:49 PM