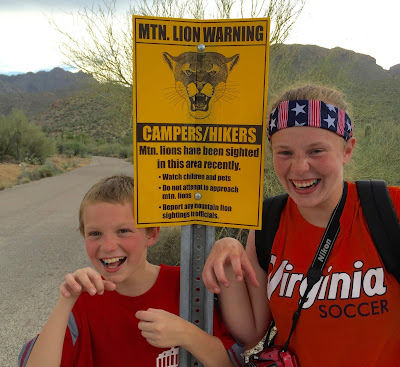 These two.  They are fearless.  Not dangerously so, but sometimes for their mother, heart stompingly so.  Because as I said on this post, I might project calmness, but internally I am a worry wort. And I usually can't resist their issued challenge as they jump, fly, ski or hit the water.  Thankfully this is only videographic evidence of this issued challenge:

I know that college is not far off and sending them out on their own is inevitable - it's a goal of parenting, isn't it?  But I didn't expect that with the award of a driver's license and the opportunity to travel overseas that the path to independence would already be started.  It's the ultimate carpool driving mother's catch 22 - so excited to not have to drive everywhere any more but missing spending time together.

They are both off on adventures this summer, and both raced right out the door without hesitation.  I miss them and can't wait to hear all about it (and might be shoveling out their closets while they are not looking :-))

Posted by elisabeth at 1:08 PM

Email ThisBlogThis!Share to TwitterShare to FacebookShare to Pinterest
Labels: kids